The Making of a Squaredle

Ever wonder how a Squaredle puzzle is born?

Let me walk you through the creation of the 500th Subscriber Special, published in celebration of our 500th Squaredle Squared member!

Want more insight into puzzle creation? Want to talk directly with the creator? Join our Discord and subreddit!

I want this grid to spell out a thank-you message. A 5x5 grid gives me 25 characters to work with, so my first thought is:

THANK YOU FOR ALL THE SQUARES

I add an exclamation mark at the end to get to 25 characters — a bit unusual, but it'll just fade out as an unused letter when you reach the first "perk". 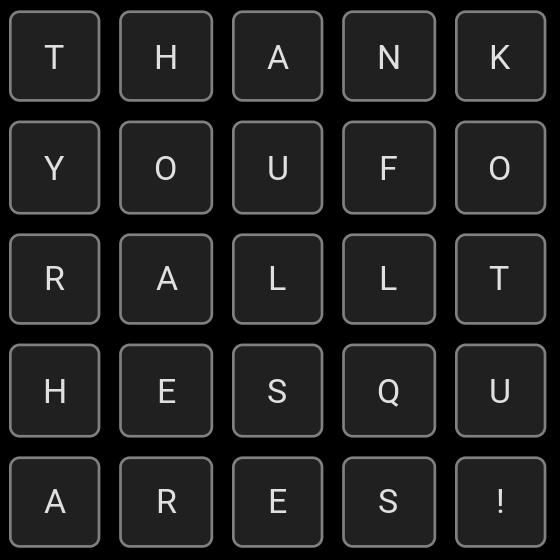 I love the 8-letter word in this puzzle that starts with "TH". It's quite appropriate.

But I quickly spot two issues:

After tinkering with it a bit, I come up with this alternative that lets me celebrate another amazing aspect of the Squaredle community:

THANK YOU FOR ALL THE FEEDBACK 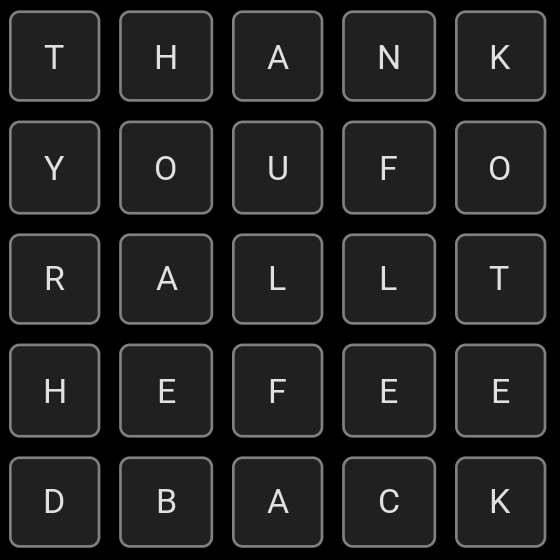 I plug this grid into my solver, which cross-references my source word lists.

It starts with a basic word frequency list to split words into Required and Optional lists. I picked an arbitrary cut-off point for word frequency and the list is far from perfect, so I still need to examine each word individually and decide whether it's common or obscure.

I read a lot, which helps me know which words are common and which ones aren't. I also have an extensive vocabulary from growing up in a nerdy family and doing a lot of crossword puzzles, so if there's a word I haven't heard of, it's quite likely to be a bonus word.

But my own experiences are subjective. I also look at a number of dictionaries, plus Wiktionary, Wikipedia, and Google Search results to check how obscure a word is. My friends, family, and Discord members are also handy resources for informal polls.

Some puzzles are released to my beta users first. I can check which words they're struggling with and ask if they should be made bonus words.

Lately I've been moving hard-to-categorize words into the bonus word category — it's more frustrating to have to brute-force a word you don't know, than it is to enter a word and have it not contribute to your main score.

Here are some words in this puzzle that my word frequency list suggests should be required, but that I'll give some subjective consideration. (SPOILER ALERT: a few of these words remain as required words.)

Phew. After categorizing these words, I turn to the 225 words marked as "optional". Most of these are words I've never heard of, and about half aren't even defined in Merriam-Webster — but they're still valid English words according to my source word lists.

14 of these words are common words that really should be required, so I move them to the "required" list.

The most controversial bonus word will probably be "halfback". If you follow American football or rugby you'll know this word, but it's not in the common lexicon the way "quarterback" is. Since its usage is really limited to a specific field (sports) — even if the field is fairly commonly known — I'll make it a bonus word. I don't want to penalize folks who have little interest in sports!

Then there are bonus words that you probably understand as soon as you read them — "refeel, holed" — but wouldn't normally think of on your own. English is great at making new words from prefixes and suffixes, and while these are technically valid words, they don't really come up often.

So now I've categorized 109 required words and 209 bonus words. There are usually twice as many bonus words as required words, so this looks about right! Next, I need to rate the difficulty — it's easily a 5, with this many words and with some of the words being more complex. Lastly, I add a special message and select the Bonus Word of the Day.

The Bonus Word of the Day has been a fun part of Squaredle since its inception in late February. It's just a way to share my love of words with my player base. And sometimes I can recognize a word that folks might think should be required, and explain why it's a bonus word. (Example for an upcoming puzzle: "brie". Did you know Brie, the cheese, is a proper noun, and therefore not a Squaredle word? But the lowercase-B "brie" refers to "broth" in Scottish English. That's definitely obscure!)

Today's Bonus Word of the Day is a fun one, and perhaps the longest one I've had so far. I hope you like it! (It's the 8-letter word that starts with "TH", plus a three-letter suffix.)

I export the puzzle into my database and let my Beta users in the Discord know about it. Once I incorporate their feedback, it's ready for release.

Support Me on Ko-fi